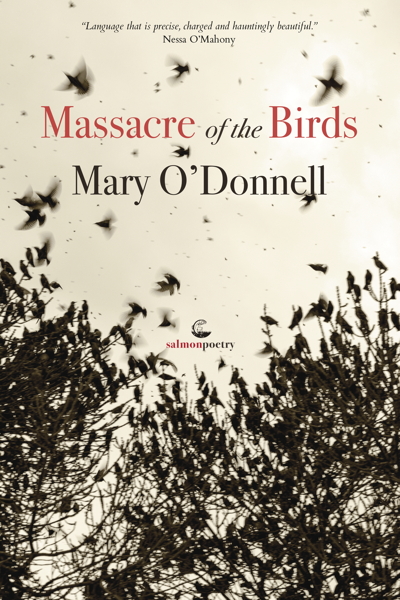 Mary O’Donnell reads from Massacre of the Birds – 2 from Conor O’Hagan on Vimeo.

1.
On the lakeshore
of conscience I stand.
God help me.

Certain that in Argentina,
a woman also stands,
nature-struck.

My unknown companion
will recognise waterfowl,
marvel at grebes, flamingos,

as I too greet the ducks
and moorhens
of this drumlin lake.

The wild pigs of her climate
still suck water
from thicketed reed-beds.

She sprays herself
against mosquitos, feels again
the deceptive rush of abundance.

Along the shore, two local men chat
about the swallows.
“Not so many th’year,”

one remarks, then bites into a sandwich.
Their murmurs reach me, sentiment
about shy birds from other decades—

corncrakes, cuckoos, long vanished,
and how, at this lake,
the pikes have overbred,

A dusk fox slouches
from the wood, summer cubs in tow
as she prepares them for winter.

3.
In Argentina, Saturday night falls
hours after I’m in bed. Even so,
a mirror conversation rumbles on,

thoughts replicate like pock-marks,
Where are the birds?
my unknown woman friend enquires,

What happened to the chinchilla,
the armadillo, giant otter?
And who last heard of any jaguars?

She bites into an olive,
sips her wine, reminds herself
to go again tomorrow to the lake.

4.
Years stretch and reverse.
Hard not to judge.
Argentina as much as Ireland,

Canada as much as France or Italy,
wherever birds are shot and feathers scatter.
See the white playboys

pose with rifles over zebra, elephant,
or cape buffalo,
as if this action was radiant.

Lucent cloud threaded behind trees
still cajoles. Briefly we believe
in the black reflection of a crannog,

its single surviving swan
creating a moment of ease.
But the seasons will not release us

from mounting debt.
On the lakeshore of living conscience
I stand.

I can do no other.

The trees here are playing with fire,
but on my island, the cold sap rises.
All day in this heat my flesh

is a violin, the strings melt
and are songless.
Something leaves me

or arrives, I cannot be certain.
The Rio de la Plata
sends mud-songs to the estuary,

wrapped in paper, green string.
In Puerto Madero, the air is smokey
from the steakhouses

near the Puente de la Mujer,
the water of the Salado brown
with a sediment of base notes.

In Ireland, the rivers chant one note,
each minds its own sound-passage
to the sea, rises in wet spring-times

of fluted birch, nippled oak-buds
which will not soften until May.
In the south I feel the breath of a god

about to close passageways of air.
Sing on, some people say,
Be silent, say I, looking

to cross the equator in a rush of clouds
to the drenched hill-woods
and mire of my own fields.

It Wasn’t a Woman

We meet on the stretch between two crossroads:
dark-haired schoolchildren,
sturdied in jackets and hats for the town
three miles away, their families bunked up
in the old agricultural college.

In this place, spirits loiter—of young men
who once handled sheep and cattle in pens,
raising them for market
to a clang of feeding buckets, disinfectant smells,
the scrape of shovels
in the dung-lumped byres.

I’ve heard music from the yard in summer,
the thud of a football as boys play
for homelands: Albania, Moldova,
Nigeria, attempting perhaps to forget
half-dreamt voices on night corridors,
to silence a ghostly bleating and lowing at dawn,
as they themselves become invisible.

Poems from Massacre of the Birds © Mary O’Donnell

Mary O’Donnell’s poetry collections include Unlegendary Heroes and Those April Fevers (Ark Publications). Four novels include Where They Lie (2014) and the best-selling debut novel The Light Makers, reissued in 2018 by 451 Editions. In 2018 Arlen House also published her third and highly-praised collection of stories, Empire. Her new poetry collection Massacre of the Birds is published by Salmon in October 2020. Her essay “My Mother in Drumlin Country” was published in New Hibernia Review and listed among the Notable Essays of 2017 in Best American Essays (Mariner). She is a member of Ireland’s affiliation of artists, Aosdana, and holds a PhD in Creative Writing from University College Cork.