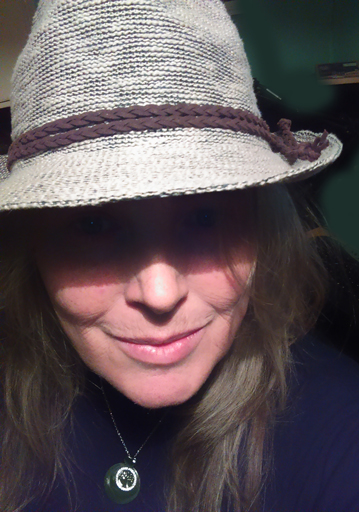 I’m of the age now
That’s how my GP put it
as he half muttered
something about female hormones
leaving my body
I imagined them packing their bags happily,
looking forward to exploring better terrain,
cooler plains.
They don’t leave quietly
there is a deep boom
sounding in me
loud enough to raise heckles
on the borders.

Their retreating noise
cuts the eardrum on the edge of sleep,
an orchestra at the foot of the bed, the deep
breath of an oboe, the high pitch squeal of a flute,
F sharp, slices at the slope of dreams.
Tinnitus has become a schizophrenic bed partner.

They leave banging their suitcases off every corner of me.
In tones that plumb the length of my brickwork
until they lean into every crack—

Then there’s the faux senility
the walking-into-many-rooms-for-no-reason,
the constant reminders
you’ve forgotten something
and the paranoia;

An innocent email from my husband with the title
Plant woman near Boyle
Was the start of some elaborate murder plot
and not simply the nomenclature
Ms. Moss
a horticulturist
and what does he want with her
only to study her petunias

I’m of the age
I have no choice
I must go with it
shrug into this hill
shoulder the northwest winds
slide in millimetres each day
towards the sunset.

In the beginning there was bog,
acres and acres,
flat as lake water after rain,
brackish after the cutaway.
The log fuff, the spit-depth footed to rough heaps,
tiny tepees peaked the horizon like sound waves.

Then it became the soil of planting, acidic, damp.
A graveyard earth.

The first time I dug the soil it was to bury Margaret
the matriarchal duck.
I covered her in black plastic
painted with a white capital M
like a mini silage wrap.

The next time I dug the soil it was to bury Charlotte,
an early variety of potato
which stopped too soon because of blight.
It was a battle on the half acre.

When I dug again I buried Arran
Edward John has set me right
“Plant the local variety” he cooed in his soft boggy accent.
The blight-resistant crop would only need — to be placed upwards to face the glut of rain —
“just butter and salt”. Edward John’s refrain

It was the 30th of June.
The long blade of summer was shortening.
Rain grazed the road to Knockbrack
I watched from the brow of the hill.
I couldn’t face the smell of freshly dug earth that day.

That year as well as Edward John
I lost six ducks, five hens and a drake named George.
I vowed never to name another living thing.
Because in the end, despite the good advice,
the bog is only suitable to ripen blueberries,
or to turn the heather rusty like a lit match,
or to swallow you up,
drag you down among the flint and bones
of those who come before you.

The bramble is unforgiving
once you take
those sweet black fruits
it spends the rest of the year
making sure it strangles
everything in the garden
between barbed fingers.

It holds my orchard hostage
John O Gold and Discovery
shake their crop to spoil for blackbirds.
My plums can’t talk,
the raspberries stop walking
and the red currants offer their berries
to any willing creature, except us.

I make blackberry jam.
Boil it until it screams,
slather its thick black curd
on home-made scones,
savour each delicious mouthful.

You waited for two months
after he had died to tackle
the dodgy foot on his writing desk.
You’d have to clear it out first,
go through all the papers
and then when that was done
you’d turn it upside down
stick the foot on hard.

But you only got as far as his poetry
pages and pages, ancient at the edges,
journals and books, staples rusted.

You sat and you read,
until all day had passed
with you
curled on the bed
cradling the years
of words now made silent.

The writing desk sits in the corner.
The foot still wobbles.

Soon I’ll be able to hail an Uber to Mars
well not hail exactly
I will inform my driver I’m waiting on the corner at Kiltyteige
beside the tall, green house.

I’ll be there early
before the postman does his rounds
watching the heron fly over
and the grey wagtail
dance in the river.

Then Uber can deliver me to the launch pad
Just off the bog road in Boyle—
As good a place as any
well known for its UFO’s—
By then we’ll all be flying everywhere anyway
one more lift-off will hardly be noticed.

Maybe someone out footing turf
will remark on the plumes of smoke
coughing across the fields towards them
wonder why the sloes have fallen off the blackthorn
or the fallow deer are galloping their way.

But they’ll get used to the daily flights
And laugh like the rest of us
at the irony
of no bus route to Boyle
but a shuttle to Mars.

When I’m strapped in sucking
my Simpkins Travel Sweets
hurtling towards the blue sky
Mrs. Higgins will lean across
and ask
Why are the windows so small?
or
Do you think there’ll be tea?
And I will smile and nod
and grit my teeth
as the capsule separates
with one neat shudder
and outside cuts from blue
to nothingness with stars.

Soon there will be queues on the bog road to Boyle
for the SpaceX Express to Mars.
And the English couple in Cloonloo
will sell their farm fresh eggs
and raw honey.
Mrs. Tansey from Bristle will tout her boxty,
and young Walsh will sell space rock
with Knockatelly running through it in red, sugar leading.

When I could get an Uber to Mars.

Sinéad McClure is a writer, radio producer, and illustrator. She has written and co-produced 15 dramas that have aired on RTEjr Radio. Her latest production “Indestructible” was broadcast on Rtejr Radio in December 2019. Her poem “Tea & Sympathy” was published in Crossways Literary Magazine in January 2020. Her short story “Five Years” has been published in Meat for Tea, the Valley Review in Autumn 2019. Sinéad had three poems published in the June 2020 edition of Live Encounters. She has also written for ALHAUS magazine. She often revisits the theme of the natural environment in her work and has a particular interest in wildlife conservation.