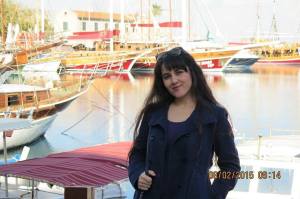 MÜESSER YENİAY was born in İzmir, 1984; she graduated from Ege University, with a degree in English Language and Literature. She took her M.A on Turkish Literature at Bilkent University. She has won several prizes in Turkey including Yunus Emre (2006), Homeros Attila İlhan (2007), Ali Riza Ertan (2009), Enver Gökçe (2013) poetry prizes. She was also nominated for a Pushcart Prize by Muse Pie Press in USA. Her first book Darkness Also Falls Ground was published in 2009 and her second book I Founded My Home in the Mountains a collection of translation from world poetry. Her second poetry book I Drew the Sky Again was published in 2011. She has translated the poems of Persian poet Behruz Kia as Requiem to Tulips.She has translated the Selected Poems of Gerard Augustin together with Eray Canberk, Başak Aydınalp, Metin Cengiz (2011). She has also translated the Personal Anthology of Michel Cassir together with Eray Canberk and Metin Cengiz (2011). Lately, she has published a Contemporary Spanish Anthology with Metin Cengiz and Jaime B. Rosa. She also translated the poetry of Israeli poet Ronny Someck (2014) and Hungarian poet Attila F. Balazs (2015). She has published a book on modern Turkish Avant-garde poetry The Other Consciousness: Surrealism and The Second New(2013). Her latest poetry book Before Me There Were Deserts was published in 2014 in İstanbul. Her poems were published in Hungarian by AB-Art Press by the name A Rozsaszedes Szertartasa(2015).