An Education in Silence

for the women of the Stanhope Street Magdalene Laundry

This morning, light spilled into the courtyard
as if God had opened a window.
The light is quiet and can’t be herded
from dormitory beds to morning mass –
it shines where it wants,
blushing the stained glass windows,
washing the priest’s words.

My mother doesn’t write.
It’s been three years. My hands
crack from the heat of the sheets
as we feed them through the mangle.
The high windows admit one square
of light, on the word repent
and I am silent like the sunlight.

An Education In Silence is © Jessica Traynor

He blows on his hands to warm them;
it looks like some ritual, some totem.

Between us, nothing but certainty –
the death-sound in the old woman’s throat –

and uncertainty – the priest’s whereabouts.
Our whispers summon only a flutter in her eyelids.

Someone had mentioned the man down the road
who lives alone, who gives some kind of absolution,

so here we find ourselves with this stout man
in a muddied fleece, who breathes on his hands

and places them on the woman’s shoulders.
Tears come first, spilling from her eyes;

those milky shallows that have mirrored us all evening
clear for a moment as he bows his face to hers.

He doesn’t look at her tears, allows her gaze to travel
to the ceiling above her bed. Only we invade her privacy.

He says nothing. Not one prayer or word of comfort.
We give him a fifty and wonder.

Some begin to mutter; one man asks what he did.
He tells us that at that late stage she had no voice left,

so he took her sins upon himself,
allowing her to pity him for all he carried.

From the top of Mount Fujiyama I send you letters,
written on square pages, then folded

in as many different patterns as a snowflake.
I drop them onto thin air; watch them fall into the world.

Open one. In it is a picture from your childhood.
You can look at it, but it melts in your hand

like the question I ask you, caught on a breeze,
and your answer, taken by the river to the flat sea.

Even through this constant, year-devouring snow,
I will always send you letters.

For his Winter’s Tale,
Master Shakespeare calls
for a covered stage
with the scent of candle-grease
and orange-peel heavy on the air.

There must be torches
to give movement to shadows
and life to the statue;
and for Hermione’s face –
tincture of pearl, crushed.

With this bowl of dust
we’ll lacquer her age,
encase her in memory
so only a movement of the mind
might release her,

might absolve
her husband’s transgression,
as the jealous moon
flings her light
against Blackfriars slates.

Pearls At Blackfriars is © Jessica Traynor 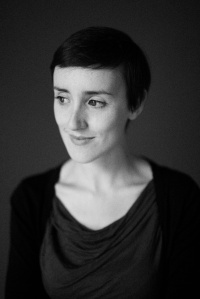 Jessica Traynor is from Dublin. Her first collection, Liffey Swim, was published by Dedalus Press in 2014. Poems have appeared or are forthcoming in Poetry Ireland Review, The Raving Beauties Anthology (Bloodaxe), Other Countries: Contemporary Poets Rewiring History, If Ever You Go (2014 Dublin One City One Book), The Irish Times, Peloton (Templar Poetry), New Planet Cabaret (New Island Books), The Pickled Body, Burning Bush II, Southword, The SHOp, Wordlegs, The Moth, Poetry 24, The Stinging Fly, and New Irish Writing among others.

She is the 2014 recipient of the Ireland Chair of Poetry Bursary. She was named Hennessy New Irish Writer of the Year in 2013 and was highly commended at the 2013 Patrick Kavanagh Award. She won the 2011 Single Poem Competition at Listowel Writer’s Week. She received a Literature Bursary from Dublin City Council in 2010 and in was part of the 2009 Poetry Ireland Introduction Series.
.
Jessica works as Literary Reader for the Abbey Theatre and teaches creative writing courses through Big Smoke Writing Factory and the Irish Writers Centre. She also works as a freelance dramaturg.
.

poethead by Chris Murray is licensed under CC BY-ND 4.0